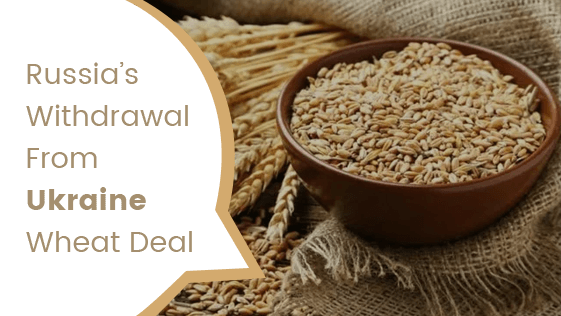 Russia withdrew itself from the UN-brokered deal, which stated that the Russian Federation allows Ukraine to export grain through the Black Sea en route. The withdrawal was likely to impact wheat and related food markets all over the world, along with wheat imports globally.

While Russia, after suspending the extension of the UN-brokered Ukraine grain export deal to allow the exports of grain from Ukraine to other countries, the Federation can withdraw the decision again at any given time.

The Russian invasion of Ukraine had already stirred things up in the world with the rising prices of grain such as wheat and corn, as the Russian Federation and Ukraine combined account for a 29% share of the world’s wheat exports.

The impact on global food prices comes off as no surprise, considering the combined share of both countries in the exports of grain globally. Wheat is one of the most common and largest shares of grain being consumed in many countries in the world, especially in Asia.

The below-represented Russia’s wheat exports show the value of exported Russian wheat to other countries in the past five years. Wheat exports from Russia rose in 2020, during the COVID-19 pandemic, and declined in the next consecutive year.

Due to this UN-brokered deal, Ukraine was able to export more than 11 million tons of grain so far to other countries and contribute to bringing down the global inflation rate, especially bringing global food prices slightly down. This comes as a significant collaborative initiative between Russia, Türkiye, and Ukraine with the UN joining other countries to battle global food prices and inflation. It is uncertain for how long the Russian government will continue to allow wheat exports.

US, UK, And EU Ban The Luxury And Other Goods Exports To Russia

Russian Banks Block From SWIFT, Driving Investors To Be Anxious 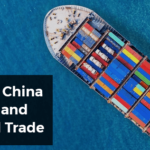 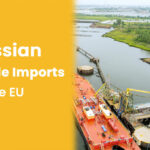