Semiconductor exports from different countries registered a downward trend in the year 2022. The exports related to semiconductors have been found to be falling in both the quarterly and yearly comparisons.

The exports related to semiconductor consists of semiconductor, diodes, transistors, electronic integrated circuits, PV cells & modules, and semiconductor device as a whole. We will trace the exports of these components from the available HS Code classifications.

The top exporting countries for semiconductors and all the related components [8541] are featured below in the image. The exports registered a downfall in some countries, while the majority of countries shown below registered an increase in Q2-2022 compared to Q2-2021.

The exports of semiconductor parts and related devices such as PV cells [854190] are represented in the image below. The exports have increased more significantly than the decrease in an equivalent amount of countries in Q2-2022 compared to Q2-2021.

The Future Of The Semiconductor Industry

The demand for semiconductors grew significantly after the COVID-19 pandemic. The industry endured a heavy toll on the production value since lockdown measures were implemented and international trade was halted.

The incidents causing further damage to the manufacturing units of semiconductors worsened the situation. Withdrawal of lockdown measures invited heavy pressure on the semiconductor industry, as more semiconductors had to be supplied for the production of electronic devices.

Along with the demand for electronics, electronic vehicles (EVs) found a rising market after COVID-19 since climate change became a serious issue to tackle with. Amidst all of this, there are clear indications that the industry will boost production units and outcomes.

As evident in the shown data above, the exports in 2022 so far have more than doubled for the cases of some specific countries such as France and the UK. Both these countries have exported a significant amount of raw materials of semiconductors and related devices to other countries.

There are reports that claim that silicon carbide and gallium nitride will replace silicone chips (semiconductors) in the long run and in a near future for EVs. As raw materials to manufacture semiconductors are also rising, it is likely that the semiconductor outputs will be stable enough.

China’s Electronics Exports Down In Q1-2022 After Rising Values 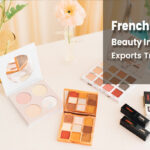